Padraig Robinson is an artist writing books and screenplays.

Commissioned by Flat Time House London, the 25 minute short film FIve Short Stories on Fire encounters John Latham’s († 2006) deployment of books and fire as temporality and event, drawing on the domestic context of Flat Time House. The film takes place in one day in the life of The Novelist (Anne von Keller), who is beginning the first day of writing a book called Five Short Stories on Fire. The day follows her through her domestic space; sleeping, eating, writing and researching, where she encounters the environmental historian Stephen J. Pyne (played by himself). During the course of the day the Novelist seems haunted by ‘The Wanderer’ (Francesco Vellei), who may in fact be a fictional character she is writing, one whose relationship with fire is very different from her own. The film begins with the Novelist waking up, and ends with her falling asleep.

The book Gaze Against Imperialism (Metaflux Publishing 2019) was written in the form of a rehearsal or index for an experimental film never intended to be made. It comes out of a longer investigation in the Irish Queer Archive, initially tracking tensions between activism and the social economy of the ‘scene’. This is summarised in a 1981 speech by President of the National Gay Federation, David Norris, who warned: ‘It would be an appalling irony if the net impact of the gay liberation movement was merely to make homosexuality safe for capitalism’. The long form text A Quare Invisibility opens the book, drawing from a speech by the Other Fellow (a camp and intellectual character in Brendan Behan’s 1954 play The Quare Fellow, set in Mount Joy Prison). Through a Queer Poetics that dissolves clear national borders, A Quare Invisibility is the ear the book. A non-psychoanalytic ear, that is, overly aware of the violence of naming; the dual incarceration of speech; and 'gay' history in the framework of a merely liberated patriarchy. This is followed by eight scenes of scripted dialogue with university librarian Cathal Kerrigan, who was co-founder of the small, early 1980's lobby group ‘Gays Against Imperialism’. By articulating the homonym 'gaze' and 'gays', the title not only points to the generative misunderstandings in any public utterance, but also to the space between reading and listening.

A root in listening is the foundation for the book 6 – 9: Notes from the archive of Dan Kane (Publication Studio Rotterdam, 2016). These ‘Notes’ were made at the analogue archive of American photographer Dan Kane. From 1985 - 1994 Kane ran a photographic workshop for US Army Berlin after abandoning a PhD in German Literature called Sprachlandschaft’ (linguistic landscapes). Sprachlandschaft required a strange form of listening to a literary character’s speech, identifying complex accents and slight idiosyncrasies referring to specific places, privileges or discriminations. This abandoned PhD became the poetic background for the book, consisting of five texts punctuated by a carefully devised sequence of Kane’s photography, which focuses almost entirely on subverting the classic conventions of the sculptural male nude over three decades. The book adopted different ways of writing about the pictorial material, ranging from art historical, to biographical, to documentary, to philosophical, and finally to literary. The literary chapter is written as a dialogue between ‘gender neutral’ voices. They are identified only as their methods of thinking about pictures; featuring a philosopher, an art historian who minored in literary theory, an artist, a curator with a good sense of humour, an anarchist, a closet iconoclast and a neo-liberal queer. 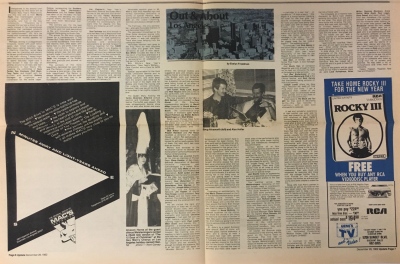